This year, I was the lucky recipient of Andornot's Professional Development Grant. The Canadian Health Libraries Association (CHLA) conference was being held in St. John's, Newfoundland, which is located in the region where I live. I have never attended their conference before, so I was determined to get there. As a relatively new health sciences librarian, I expected that the experience would instill in me a sense of what's happening in the broader landscape of health sciences libraries beyond my organization and across the country. It did not disappoint.

The opening keynote speech was a fascinating account of Newfoundland history, and how the genetic disorders brought over by the first European settlers still impact the health of the people who live there today. It demonstrated the importance of ongoing medical research and the difference it makes in the lives of so many people. It is so rewarding to know that the work I do supports initiatives like these. I took in many informative sessions on searching and collaborating which were relevant to me. As there were a very limited number of sessions about health sciences library collections and metadata, I see a great opportunity for future conferences to focus on those themes. I am confident that I will apply to present at future conferences on at least one of these topics.

I was fortunate to have the opportunity to network with colleagues based in the Maritimes and across Canada, as well as throughout the United States and even Sweden. By chatting with my fellow delegates between sessions and during receptions, I was able to get a much broader view of the current climate of health sciences libraries than I had initially expected. I even reconnected with a friend I met at the Canadian Libraries Association conference in Winnipeg a few years ago when we were both MLIS students. I was not aware that she had also pursued health sciences libraries, so it was quite a surprise to run into her across the country at a completely different conference!

One of the highlights of my conference experience was meeting Jonathan Jacobsen. For the past 3.5 years, I have been working closely with him to develop, launch, and maintain our library catalogue. After countless e-mail exchanges with him which resulted in the successful completion of a major project, it was particularly satisfying to finally shake his hand and put a face to a name. Similarly, I was pleasantly surprised to find that most of the vendor representatives in attendance were familiar to me. During my short time in the health sciences so far, I have become much more connected within the field than I had realized. 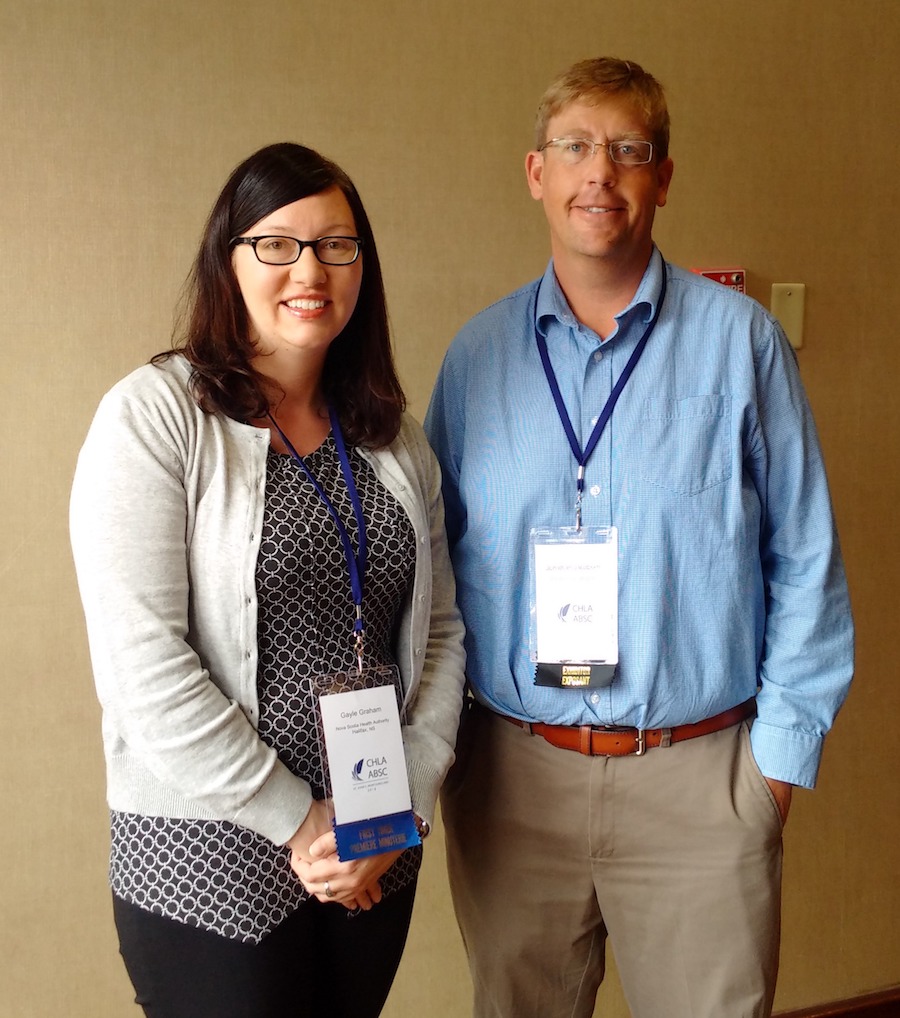 Gayle and Jonathan at the CHLA Conference.